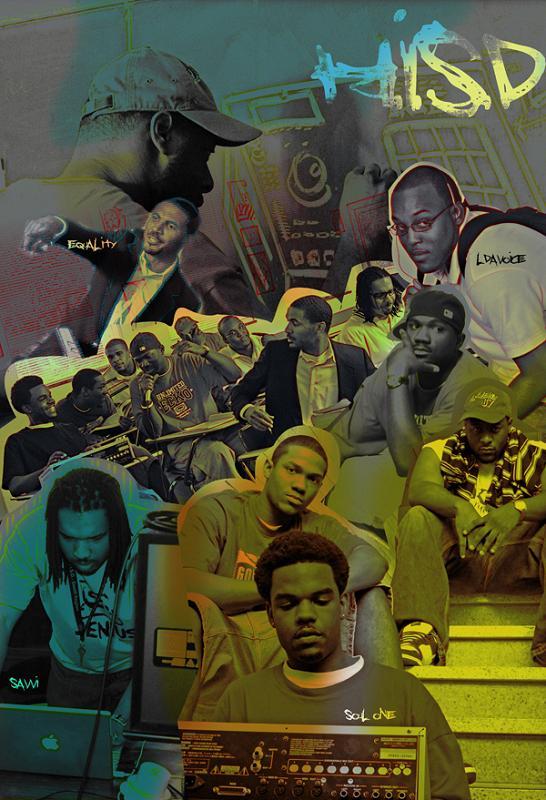 ROCKIN´ aka SPACE UP

An evening with Houston’s other, better-rapping H.I.S.D.

Remember when hip-hop was exciting, back before its braggadocio became banal, its lyrics repurposed and watered down? Wouldn’t it be great if, say, eight guys got together and made a conscious effort to produce an LP that steered away from the tales of shiny teeth and silly little dances that have mummified an art form? And wouldn’t it be even cooler if said group came equipped with wicked hip-hop names like Scottie Spitten and Ldavoice?

Meet Hueston Independent Spit District, a veritable eight-man smorgasbord of soul, style and relevance. H.I.S.D. released their freshman super-collabo The District, an LP that replaces foul language and clichés with wit and originality, this past October. The Press recently met this heady hip-hop powerhouse at a bookstore, of all places, to discuss how hip-hop has become irrelevant, forgetting lines onstage, their „bucket rule“ and why Houston Mayor Bill White loves their album.

Houston Press: So, a bookstore, huh? Are we having a reading after this or something?

HP: Walk us through how the eight of you teamed up. Is there, like, some hip-hop mega-store or something where a bunch of MCs stand out front looking for work like the dudes at Home Depot?

Ldavoice: First it started off with [the group] Blak Embassy, which was Savvi and Equality. They were on tour promoting Savvi’s album when they came to Beaumont. King Midas and myself were going to school there and we were all booked for the same show or whatever. We saw each other perform, exchanged numbers and us four hooked up. Scottie Spitten is King Midas’s brother, so that was a given. And we pretty much just recruited E-Classic and Soul One along the way.

HP: Tell me this: With eight dudes involved, who’s the leader? I mean, the Goonies had Mikey, the T-Birds [in Grease] had Danny — who does H.I.S.D. have?

King Midas: We all kind of lean on Savvi as far as the organizational stuff is concerned, since everything is under his label, but there’s no actual leader of the group.

Soul One: Everyone pulls their own weight. We make decisions as a group, for the group.

Scottie Spitten: We’re like a team, let’s say in basketball one night a dude might score 30, he’s the star of the night. The next night he might not be feeling it, but we got each others‘ backs, so someone else steps up.

King Midas: With some of the shows we do, the equipment isn’t great, so it’s the dude who picks the „good“ mic that’s the star of the night. (Laughs.) We got, like, four dudes rappin‘, and if you happen to be the one that grabs the „bad“ mic, well, it’s gonna be a bad night for you.

HP: Nice. With so many guys running around on stage, have you all ever had someone just really eff something up? (Equality smiles; group laughs.)

Ldavoice: At our album release party, actually, Equality couldn’t remember the intro poem from the album, so he kept on repeating the same line like three or four times. (Laughs.) He made it through, though.

HP: What goes through your mind when you forget a line onstage?

Equality: I was just like, „Please just let me remember the next line.“ But I don’t take myself too seriously where I beat myself if I make a mistake. We all human, but when I make a mistake I just try to come back harder next time.

Ldavoice: Yeah, but you still owe the bucket about for that one. (Group laughs.)

Soul One: We got this bucket where if someone messes up during a show, they gotta throw in it.

Equality: That’s a little rule that we set, but we don’t follow it. Nobody has ever put money in it.

HP: Maybe this is where it’d be good to have a designated leader. He could settle all bucket-rule disputes.

Soul One: The bucket is more of like a metaphor.

HP: So there’s not a real bucket.

Soul One: Well, there’s a jar. But there ain’t no money in it. I guess that’s the metaphor.

HP: Is it hard being a hip-hop group in Houston, considering we’re not really known for that? It’s like running a Chinese restaurant and trying to convince people you make a really good enchilada platter.

Soul One: People always say, „Y’all from Houston?“ and we get tired of hearing that. Don’t worry about that; where we’re from shouldn’t skew your take on the music, just listen to it and you’ll be able to decide if it’s quality or not. Don’t pass on us just because we’re from the H.

HP: Hip-hop had it back in the day; now, save a few artists, everything is just shit. Where did it all go wrong? It was Bobby Brown, wasn’t it?

Savvi: You know, just the other day someone walked past me wearing a T-shirt that said „Radio Killed Hip Hop.“  It caught my attention, so I pondered on it for a minute.  Then I asked myself, „What is the scope of hip-hop?“  Maybe I’ve got it all wrong.  If „radio“ or „what radio plays“ defines what hip-hop is, then that gravely reduces the hip-hop movement and culture to a shadow of itself.  Hip-hop is where the people are. Hip-hop lives where the people live. Hip-hop still has its many flavors, that’s if you don’t limit yourself to where you get it from. In my humble opinion, it’s all relative, based on the range of your exposure. Bobby can probably be blamed for a lot of things, but I wouldn’t put that on him.

HP: The District is really good. I’m not sure Houston has seen too much like it that was actually birthed in our city. It gets love from hip-hop heads for sure, but someone please explain why the Mayor has jammed your CD.

Scottie Spitten: His son’s a player on our [basketball] team I help coach. We had this camaraderie-type team trip to Waco. The team and all the fathers were eating breakfast one morning and [Mayor White] came up to us, ‚cause all the coaches were sitting at one table. He was like, „Which one of you raps?“ or „Which one of y’all has a CD?“ and I said „I do,“ and he was like, „Wow, man. It’s really, really good. I’m not saying that just to be saying it. We were listening to it on the way down here.“ His son had bought one from me, so that’s what they were jammin‘.

Scottie Spitten: Ha, I don’t know about all that.

Soul One: Y’all gon‘ get that man fired, stop playing. But you can get the CD through our MySpace www.myspace.com/hisd, or you can go to Soundwaves.

King Midas: You can come to my house and get one too. You can download illegally at any shady Web site and I don’t even care; just leave us a message or something. Let us know what you thought, man.